Thank you for your patience while we retrieve your images.

10 photos
Project Statement
A year after Superstorm Sandy—a year that coincided in my own life with a series of personal storms—I took a trip in late October, 2013, to the coast looking for a new perspective. The deserted beaches of the USA's Atlantic coast have long been one of my favorite places, and I sought grace amidst the familiar and ordinary—knowing that photography allows the ordinary to be captured in extraordinary ways. There the seagulls, technically called "Laridae", of Wrightsville Beach, North Carolina, quickly became my subjects. Instead of viewing them as the scavengers of the sea or as annoying pests to beachgoers, I re-imagined the birds as ballet dancers and sought to capture their elegance and grace. With each photograph my goal was to highlight their unique personalities and qualities. Instead of ordinary seagulls, they became danseurs (male ballerinos) and danseuses (female ballerinas) as they jumped, turned, and flew—sometimes in tandem, sometimes counterpoint to each other—always surprising me with their exquisite beauty.


Image Description
The weather—the wind and completely overcast day—served to make these images possible. While the photographs may look like they were shot in a studio setting, they were not. The overcast sky served as a white background, and the wind (preceding an approaching storm) enabled the birds to hover above me, almost stationary, for extended periods of time. Though images such as #3, #4, #6, and #10 in the series may look as if they have been manipulated or as if they are composite images, they are not. Instead the images are a combination of planning and luck. I had performed several practice shoots of the birds on warm, bright, sunny days, in order to learn their patterns and behaviors and to practice capturing them from different angles. But then I waited for an overcast day with a threat of rain in order to shoot the birds as they appear in this series I have called The Laridae Ballet. In keeping with the ballet theme for the shoot, I have titled each image with the ballet term suggested by the bird/bird's position or movement. 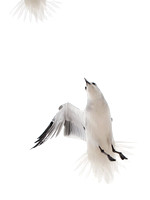 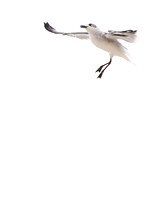 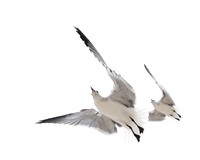 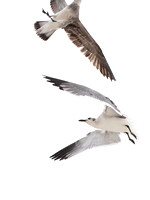 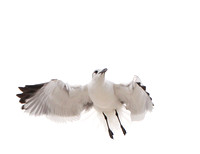 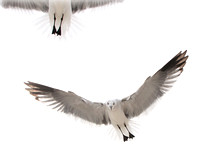 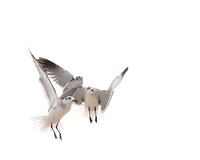